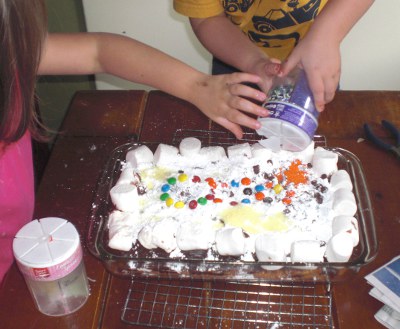 Recently the Kids demanded the creation of a Snowman Cake. “Snowman cake!”

What resulted was a young-person directed monument to overindulgence.  Here’s how it went:

My wife baked a 13×9 sheet cake.  Everyone helped spread on chocolate frosting.  Good so far.

And here’s where, if you’re making this at home, I highly recommend you STOP.  Slice the cake and serve with a glass of cold milk or a dish of ice cream.  You’ll thank me.

We did not stop there however.  Keeping with the ill-defined snowman theme the cake was assaulted with powdered sugar (don’t think dusted with; think dumped on).  Next came colored sugar and leftover cupcake decorations.  And why not pour on a quarter cup of sprinkles?  For good measure.

We had some chocolate chips lying around.  On the cake they go!  “Somethings missing. . .”  The Kids muse.  Yes of course, we’re missing smiley faces of M&Ms.

And just in case any sweetness tried to escape (or a vegetable tried to nose its way in), the perimeter of the cake was ringed with a wall of marshmallows.

You might be thinking, “Why did you let your children put so much on top of the cake?”  Two reasons:  1. Dancing in my head was a vision of some Hallmark / Norman Rockwell family story that would be passed down for generations.  “Remember the time we made the 2,000 calorie a slice snowman cake?”  2. I do like deserts, and on paper this cake was adding up quite nicely.

But, as you’ve no-doubt sleuthed, the cake was terrible.  When we weren’t choking on powered sugar dust, the rest of the sweet lot was actively boring holes into our teeth.  And naturally none of the Kids ate a marshmallow.  Mostly they picked off the chocolate chips and M&Ms.

In the end I salvaged the day with a toy bulldozer – strip-mining the cake until the edible original layer of cake frosting was exposed.  Messy, but fun; and a respectable dessert.  [or desert – I get them confused – whichever one isn’t filled with sand and camels]

Well, I guess in the end we might have ended up with a cherished family story after all.

I’m off to the dentist now.