The Daring Adventures of Riley Justice!

Riley Justice, the hard-working (or is it hardly working) accounts-receivable cog helping to keep the corporate machine grinding on, while occasionally foiling Corporate Raider’s sinister plots. 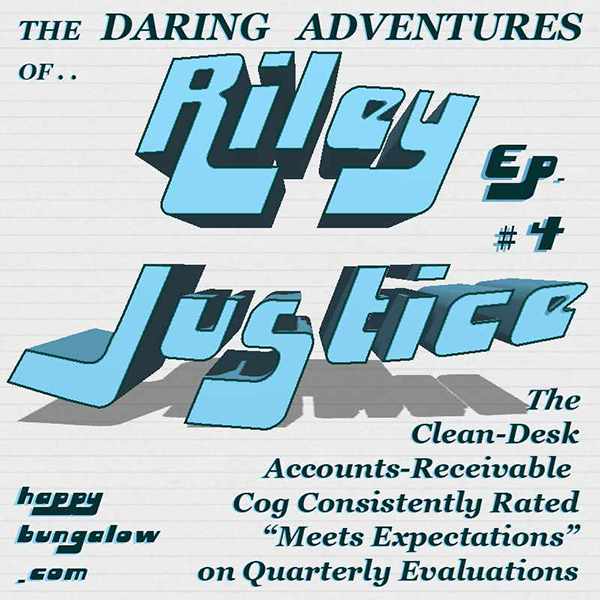 Riley Justice and the Corporate Team Building Exercise in Deception

Accounts Receivable is an efficient and ruthless machine. Invoices are processed and dispatched within hours of completion of contract. Payment is expected statim vel propter aliud. Statim vel propter aliud is a Latin turn of phrase crafted especially for Accounts Receivable. It’s meaning is ambiguous; it’s intent is menacing. Payment is expected upon receipt.

Accounts Receivable is an efficient and ruthless machine, but still, there is room for improvement. Thus was formed the once-yearly Planning Exercise in Creative Thinking. PEcT for short. They’re always held off-site at some corporate creative outside the box blue sky center. There’s grass, fresh air, comfortable furniture, and loads of snacks and drinks.

And you can wear shorts.

Shorts should be fun, but at the PEcT they are not. Shorts suggest easy conversations and genuine life-enjoying laughter. While wearing shorts there should never be discussions about maximizing efficient coefficients of something blah blah blah. BLAH!

However, this year’s PEcT is still a few weeks distant, which means today is pre-planning for the event. The agenda is a mystery, but promises to be something big as Accounts Receivable {Corporate}, a sub-department of the larger A.R. whole, booked the largest conference room in the building.

Latecomers are left to lean against a wall, but Riley’s smart and gets there early enough to be able to sit down, AND be no where near the front. However, this was at the cost of a vital mid-morning coffee refill. This is not to say time had not been allocated for the refill. It had.

But upon arrival Riley found the coffee pot empty. Does no one abide by the rule that when you drink the last cup from the pot, you start a new batch?

“Okay, everyone.” Frank, the head of sub-department coughed a little nervously. “It looks like we have a quorum, so we’ll get started.”

Riley once looked up the definition of quorum as the sub-department head used it in about every meeting. It turned out not only was Frank using it in questionable context, he also wasn’t using the term correctly. Though, Riley never relayed this incorrect usage fact to him.

“We’re going to do some planning ahead of the Pec Tee that we’ll be taking in a few weeks.

“Peak Ta.” Came the correction from the back of the room. There was some debate on the correct pronunciation of the anagram.

“Yes.” Frank didn’t care either way, he’d rather be looking over spreadsheets. “Well, the ah,” he used the colloquial, of which there was no pronunciation debate, “retreat.”

“Retreat from work! All right boss man.” Suck up Larry. He was the Venn diagram intersection of Frat Boy, Mathlete, and Insurance Salesman.

Riley was not, is not, and will never be a fan of his. Just about everyone else was though, as evidenced by the genuine-forced-office-laughter.

“Actually,” Kelli, a junior HR personage, stood up, “it’s not personality testing. We’re going to be doing a series of fun [?] activities that will tell us more about ourselves. Yakity yak yak yak yak. Does anyone have any questions?”

“Will this be used to sort the department?” Ned asked.

“No,” Kelli said as Riley simultaneously mouthed the word, “we’re going to use the information to reorganize and restructure the department. Synergy?”

“All right boys! Bring them in!” Kelli yelled. The conference room doors opened and some sharply tailored executives wheeled in three handtrucks stacked with cardboard boxes. “Thank you.” Kelli dismissed the execs. “These boxes are loaded with weapons.”

“Uh yes.” Frank interjected. ”As you can see by the number of folks in the room. Ah. We just have too many people.”

“What?!” Came the shriek from Paul. The accountant well-past middle-age who was truly fast on the adding machine, but was genuinely slow [read: painful to watch] on the computer. Paul was certainly someone on the top of the layoff list.

“Yes.” Frank continued. “New regulations stipulate that the ratio of accounts receivable staff to accounts payable staff be no more than one hundred to one.”

“What?!” Judy that time. She was good with numbers.

“Exactly. With only eight staff in accounts payable and a bit more than twelve hundred in accounts receivable. Something just has to give.”

Frank rolled with laughter at this suggestion. “Oh Larry! Oh Larry! This guy. Hire more accounts payable!” Frank took in a deep breath and wiped a few tears from his eyes. No kidding. The guy was laughing so hard he was crying.

“Okay.” Kelli was not an accountant and could care less for all the numbers talk. She had three more of these sessions that day.” Go ahead and open the boxes up. Choose a weapon, but wait to hear the rules first before you do anything else.”

The boxes were torn open and inside were weapons from every 70s dragon-slaying, barbarian-rampaging, knight-questing, kung-fuing, and ninja-kicking movie. “Go on, grab ’em out.” Kelli urged with a smile.

Larry and his little band of worshipers went for the axes and hatchets. Suck-ups. Always trying to score points by cutting the budget fat and reducing staff redundancy.

“Last accountant standing gets the cubicle by the window that looks outside!” Larry yelled as he swung a mace in circles above his head.

“What?!” Riley that time. “Wait. No, I didn’t hear the rules!” Then Riley remembered network daytime television. “I CHOOSE TO CALL IN SICK!”

Riley woke up on the the couch. Oh my goodness. It was just a dream. “Phew!” The Price is Right was on the television. It’s Pinko – Riley’s favorite. But just as the red disk was about to fall into the $10,000 slot the world was enveloped with the sound of scraping chairs.

People were standing up. Riley blinked, terribly confused. It’s the PEcT pre-planning session, the real one. It’s the conference room It’s lunch time. Riley had fallen asleep. It was all just a dream.

Well, a dream within a dream actually.

DON'T LET THE FUN STOP!
Subscribe today to have our Just PlainFun articles (just like this one) delivered to your inbox twice a month. Before they're published on our website!
Subscribe
We are no fan of spam and never share your details.
https://happybungalow.com/wp-content/uploads/2017/04/Serial-Fun-Office-Fiction-Riley-Justice-by-Don-Clark-episode-4-600-S.jpg 600 600 Don https://happybungalow.com/wp-content/uploads/2015/07/Happy-Bungalow-wp-logo2.png Don2017-04-24 12:49:232017-10-31 10:10:27Riley Justice and the Corporate Team Building Exercise in Deception

Handmade: A Tale of Production – Part 1 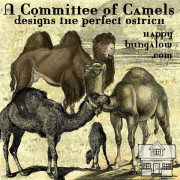 Where Do People Come From?