Who Ate All the Fish?

Archibald Penguin, Our Bird,
The Famed Detective.
The Cheeky Penguin who
Loves Fish as Almost as Much as
He Loves Fighting Crime!

We find Archibald Penguin, Our Bird, on the ice and snow-covered shores of the Southern-Most Continent. He stands near the edge of the water, the cold gray sea continually washing against the frozen ground. His ever-present companion, Henrietta Puffin, is with him. Together they look out towards the sea where there is water in great abundance.

“But there is one thing missing Ms. Puffin.”

“Indeed Penguin. Indeed. What do you suppose is the cause of this?”

“What my dear Puffin?” Our bird spun on his webbed feet to look inland. “Or more precisely who?” The pair looked down at four sets of footprints leading inland. “This cove is normally teeming with fish, but there are none to be seen. What is to be seen, however, are three sets of footprints.”

“Yes,” Ms. Puffin added, “If I’m correct, the tracks of the Walrus, Seal, and Polar Bear.”

“ I concur. I purpose we follow the trail of the Walrus. The trail looks particularly heavy.”

“Laden with a multitude of fish?”

“Perhaps that is so. Let us go and find out Ms. Puffin.”

Penguin waddled after the Walrus, Henrietta Puffin strode beside him. The air was crisp with the strong scent of salt, but occasional breezes brought the whiff of fish along. “Those fish are out there somewhere.” Our Bird commented. The pair topped a rise and left the formerly fish-full cove behind them. The full open ocean stood before them.Lapping along in the waves was a shark. His little head poked above the water, his eyes looked nervously about. “Let say we speak to this folk over here.” Ms. Puffin suggested. The two birds walked to the edge of the water. “A word with you shark? We’d like a word with you.”

The shark swam over. “Yah? What do you want?”

Archibald Penguin, “We’re looking for the missing fish from the cove. Have you seen any in your swimming?”

Ms. Puffin, “Don’t sharks normally do their business below the water? Sharks don’t normally poke their heads out of the water and talk to other animals?”

“Normally I spend my time swimming yes. But when I talk to other animals on the shore, well then I poke my head out of the water.”

Archibald Penguin saw the futility of the exchange, “Well, should you come into such knowledge concerning the missing fish, we’d be glad to hear of it.”

But the shark made no reply; instead he tucked under the water and swam further out to sea.

“A suspicious fish is he not?” Henrietta Puffin said.

“Hmph. Let us move on. I have wind of something.”

They glanced at the Walrus, then at each other, and exchanged a look. The Walrus was so far from shore, attempting to hide, and chewing on something.  Archibald whispered, “I think we’re onto something here.” They stood before the Walrus.

“Ahh, good day to you sir. I believe we have had not the honor sir. I am Archibald Penguin. This is my companion Henrietta Puffin.”

Archibald Penguin’s ears pricked at this slight rebuke. “Do we find you at an inopportune time?”

“A bit. Wouldn’t mind if you come back later.” Came the jumbled reply from the Walrus.

Why was the Walrus being so short? Was he hiding something? Archibald thought it best to take the classic approach to this one. “Yes, well, we have only come to call sir, and introduce ourselves.”

“And you would be sir?” Archibald asked.

“Yes. Well.” Perhaps another old standard? Our bird paused and considered the Walrus before him. “Who are you?”

“What is the difference?”

“I really want to know.” Our Bird paused again, and winked at you, sly reader. “Tell me, who are you?” Archibald Penguin coughed, regained his straight face. “It’s a rather easy question. Let me demonstrate again, I am the Penguin.”

“I am the Puffin.” Supplied Henrietta.

“I am. I am.” The Walrus hesitated. “I am not going to say it. You think you’re so clever asking questions around here. I know who you are before you said anything. How’s that for clever? I don’t need to fill in your lyrics bird.”

“Enough games then! What have you been chewing on Walrus? What are you hiding from us? Is it –”

Read our next installment to find out!

Boy Holds Too Many Balloons, Floats Into Sky 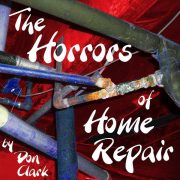 Pa and the Dragon

The Horrors of Home Repair!